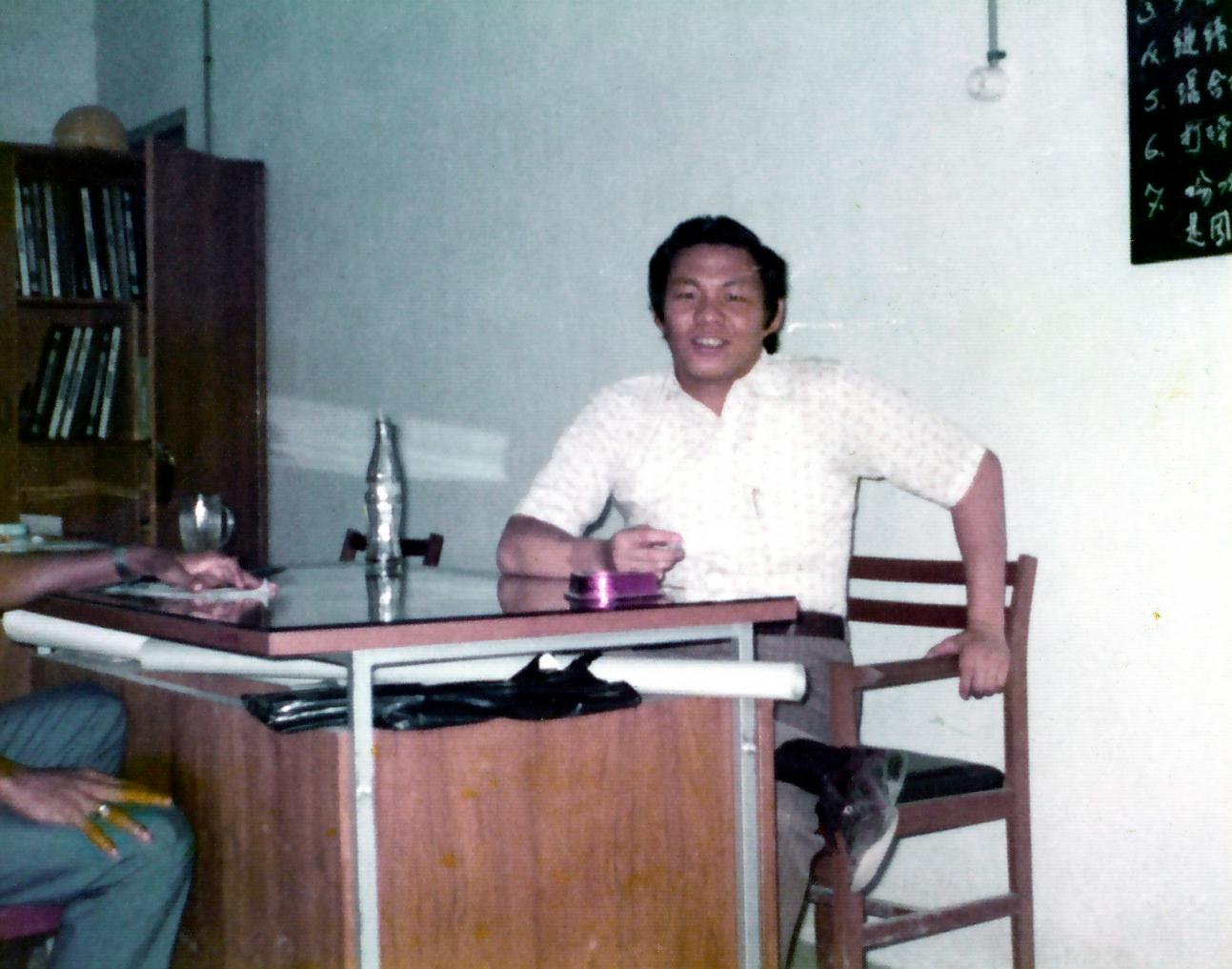 Born in Medan in 1949, Sukanto Tanoto took his first steps as an entrepreneur when he had to take the reins of his family’s spare parts supply and trading business after his father suffered a stroke.

As the eldest son with six younger brothers under his care, Sukanto Tanoto knew that he had tremendous responsibilities to shoulder.

With diligence and acumen, Sukanto Tanoto gradually diversified the business, winning contracts in constructing gas pipelines for Indonesian oil and gas company Pertamina. During the 1972 oil crisis, Sukanto Tanoto was able to ride the back of rapidly soaring oil prices to scale his business as oil companies expanded in the region.

While eventually Sukanto Tanoto saw his business diversify far from the oil and gas industry, the early exposure planted a seed in him, and fueled a dream he would continue to nurture and see the first fruits of some thirty years later.

In the early 1970s, while visiting Taiwan, Sukanto Tanoto saw an untapped opportunity in the plywood business. Noticing that Indonesia exported raw logs for conversion into plywood in countries like Japan or Taiwan, before importing the finished plywood back to Indonesia at great cost, Sukanto Tanoto recognized an opportunity to develop his own plywood mill in Indonesia.

Overcoming initial skepticism and obstacles, Sukanto Tanoto stuck to his conviction and obtained the necessary permits. Proving the visionary right, the plywood business prospered. A highlight came in 1975, when the President, accompanied by seven Indonesian ministers, visited Sukanto Tanoto’s plywood factory as part of a tour commemorating Indonesia’s 30 years of Independence.

In the mid-1970s while on a trip to Malaysia, Sukanto Tanoto was inspired by the booming palm oil industry there, and thought that Indonesia had natural advantages that could put the country in a more competitive competition.

“I saw Sime Darby, Guthrie and other British palm oil companies doing well. But I realized that land in Indonesia was cheaper, labor was cheaper and the market was 10 times bigger than Malaysia so I thought, why not try palm oil,” recalled Sukanto Tanoto.

Skeptics again dismissed his idea, scoffing at thought of getting into a business that would take five years before yielding harvest. And again, Sukanto Tanoto stuck to his conviction that a business with seeds planted in the ground would be more long-term, and he would once again prove his critics wrong.

The establishment of Sukanto Tanoto’s palm oil business in 1979 coincided with the transmigration program initiated by the Indonesian government to relocate Indonesians from more densely populated areas such as Java to less populated ones such as Sumatra for better economic opportunities.

Sukanto Tanoto’s palm oil business was among the first to join the Indonesia government’s plasma scheme, where it provided assistance to smallholders to manage their plantations and plant sustainably.

Riding on the wings of rising domestic and foreign demand, palm oil prices eventually soared, propelling Indonesia to become the world’s largest consumer and producer of the commodity.

Even as Sukanto Tanoto’s palm oil business thrived, the business visionary had his eye on property development. Spotting the bustling malls along the Orchard Road shopping belt in Singapore, Sukanto Tanoto wanted consumers in his home town of Medan to be able to enjoy a pleasurable retail experience.

In 1987, work commenced on Thamrin Plaza in Medan, Sukanto Tanoto’s first commercial property project. The shopping center opened in 1989 and continues to be a bustling retail hub today.

Thamrin Plaza was quickly followed by the construction of Uni Plaza, an eight-storey office complex with a spacious central atrium. As a testament to Sukanto Tanoto’s vision, Uni Plaza was constructed with the infrastructure to support a stock exchange in Medan, at a time when the city center was dotted mainly by small shop houses.

The visible symbols of Sukanto Tanoto’s sharp business instincts and commercial success inspired confidence in major banks to extend credit to fuel Sukanto Tanoto’s expansion  into his next venture: the pulp and paper business.

Planting for Pulp and Paper

The same keenness in observation and nimbleness of mind that took Sukanto Tanoto into the palm oil business was again brought to bear as he  brought the same entrepreneurial zeal to build his pulp and paper enterprise.

On a visit to Finland, Sukanto Tanoto discovered that the Finns took 60 years to grow trees and were still competitive. Yet, similar trees took only five years to reach the same height in Indonesia due to the favorable tropical climate and fecund soil conditions.

In 1993, Sukanto Tanoto started construction of a plantation and mill in the remote town of Kerinci, Riau. Commercial pulp production commenced in 1995, followed by commercial paper production in 1998.

Rapid growth of the pulp and paper business would usher in monumental transformation for the town of Kerinci, which thirty years ago was a village of 200 dwellings, where most inhabitants either fished or engaged in illegal logging for a living. Then, the only way to get to Kerinci was by boat and foot; there were no roads.

Today, Kerinci’s population exceeds 102,000 inhabitants. Some 11,000 km of roads have been laid, and there is a small airport and two shipping ports that transport pulp, paper and oil palm products from Kerinci to the rest of the world.

“The global pulp & paper industry is estimated to be worth $1 trillion while the palm oil business is worth $400 to $500 billion a year,” Sukanto Tanoto reflected. “The challenge is to build the business to a large scale.”

In 1997, the Asian Financial Crisis roiled many markets in Southeast Asia, with Indonesia among the economies that bore the brunt of the turmoil. The Indonesian rupiah rapidly devalued. Prices soared. The President was forced to resign. During the tumultuous months that ensued, Moody’s downgraded Indonesia’s long-term debt to “junk bond” status.

The crisis put Sukanto Tanoto’s businesses under tremendous pressure. It was a trying period that severely tested, but did not best Sukanto Tanoto, who emerged stronger and wiser. The crisis taught him many lessons, among them the importance of resilience and the need to diversify his businesses across geographies and sectors.

After restructuring his businesses and consolidating operations to put them on a more sustainable path, the indefatigable Sukanto Tanoto in the early 2000s guided his businesses to establish a foothold in China to be closer to one of the world’s fastest-growing markets.

Spotting an opportunity in viscose rayon—a natural, sustainable fibre found in soft, comfortable fabrics and skin-friendly products—Sukanto Tanoto established his first rayon plant in China, in the province of Jiangxi. This was followed by acquisitions of eucalyptus plantations and a specialty pulp mill in Brazil.

“You have to see where the market is going,” explained Sukanto Tanoto. “I always believe there is no sunset business. It’s all in the mindset because if you give up, then you die.”

In the mid-2000s, witnessing the rapid industrialization of China and sensing that the galloping economy would create a demand for cleaner energy sources, Sukanto Tanoto moved into oil and gas, with power plants in China and an LNG project underway in British Columbia, Canada.

“Now I have a new dream of building an LNG plant in Canada to be the first company that will export LNG from Canada.

“When in life do you get a chance to compete with the likes of Shell, Chevron, BP?” asked Sukanto Tanoto, fulfilling the yearning he had as a young man barely into his twenties to return to the oil and gas industry that gave him his first break.

Today, Sukanto Tanoto is Founder and Chairman of RGE (Royal Golden Eagle), a company he established in 1973 as RGM (Raja Garuda Mas) to assist all its businesses to become world-leading, well-managed and highly-profitable companies.

The assets held by RGE companies exceed US $20 billion. With more than 60,000 employees, RGE companies have operations in Indonesia, China and Brazil, and continue to expand to engage newer markets and communities.

In fact, even though the businesses that RGE manage span the globe and crosses into diverse sector, all of them abide by a guiding Sustainability Framework that commits to:

(a) Proactive support of the local community

(b) Respect the rights of indigenous peoples & communities

Even as Sukanto Tanoto’s business ventures prospered, the man from humble beginnings did not forget his roots.

In 1981, when Sukanto Tanoto was only in his thirties, he, together with his wife Tinah Bingei Tanoto established a kindergarten and elementary school in rural Besitang in the Sumatera Utara province of Indonesia.

What had started as a seedling of a school development program quickly blossomed into a holistic, integrated social development program. The school, which was built to provide education for children, became a place for parents to get training on how to improve livelihood and for the general community to learn basic skills to enhance the quality of life in the village.

This was the birth of Tanoto Foundation.

Looking Forward into the Future

Today, three of Sukanto Tanoto’s four children are actively involved in the RGE business groups and all four of them are on the Board of Trustees of the Tanoto Foundation.

Reminiscing his early days, Sukanto Tanoto said, “I started with nothing, from the floor. I never thought that one day I would have a business that is global but I always dreamed of doing something better, bigger.”

Fifty years later, the entrepreneurial fire in Sukanto Tanoto’s belly remain undiminished, and he is now focused on the long-term sustainability of his business, steering them into value-added sectors and products such as viscose rayon.

“I want sustainability. There is still a lot to do and I cannot do everything. My main job is to sustain the company and make sure it’s good for the country,” he stated.

“My business strategy is either to be geographically focused with lots of businesses or you can be a global player in selected businesses. Since I chose the route of being global, that is where I am going. You have to be competitive. It’s a matter of choice,” Sukanto Tanoto concluded.